We started descending from Ahivant at 6.30 am. We followed the same route from which we ascended yesterday till the point where one route traverses towards a col. No need to follow route towarda Aamrai. The traverse route descend down to col. From col, there is  road construction going on; which will connect Bilwadi to Daregaon. This route is quite straight. We descended down to Sindhipada first and then to Daregaon. Our next aim was Saptshringi gad. We needed to reach Nanduri from which we planned to climb Pahilya payricha route. This route is well built using concrete steps.

Daregaon phata to Nanduri is 3km distance. We waited for 30 minutes for bus or jeep but no one stopped. We decided to walk but luckily one jeep owner from Daregaon gave us free ride till Nanduri. We fuelled ourselves with pav-vada, misal, Bhaji and tea.
You can also extend your trek by adding Mohandari fort in itinerary. It is near to Nanduri.We skipped that fort as it was not included in original plan.

The route to Saptshringi gad is simple. But the heat and heavy backpack made us drained completely. It took us 1.5 hrs to reach near Saptshringi temple. Mahadeo joined us there. He waited there for more than 3 hrs. Nobody interested to go to Goddess Saptshringi. Me and Mahadeo headed to took blessings. As usual there was rush and it took us 1.5hrs to complete the queue and darshan. It was 12.30pm and heat was at its peak. Gaurav declared that he was not continuing the trek due to health reason. So we were 4 again.We decided in unison to had lunch. Shev bhaji and bhakri was my weak point. It made my day :). 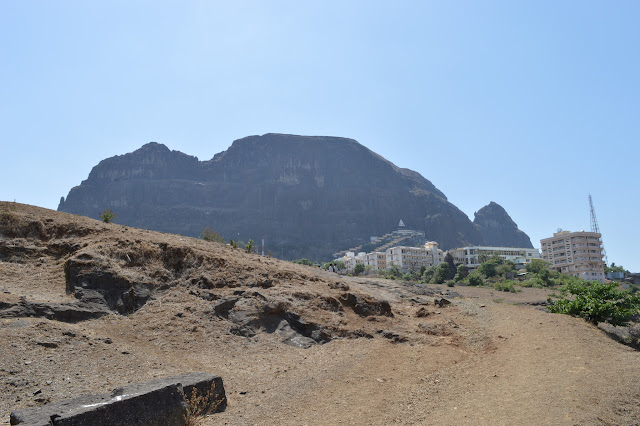 Our next aim was to climb Markandya. You can easily spot it from the Saptshringi gad. At its pick , there is temple of Sage Markandya.

Confirming the directions with local people, we started descending the the plateau on which Saptshringi gad situated. Route is well trodden. Many people goes to Markandya due to its mythological connection. Once you descend down completely you need to start ascend from the khind. 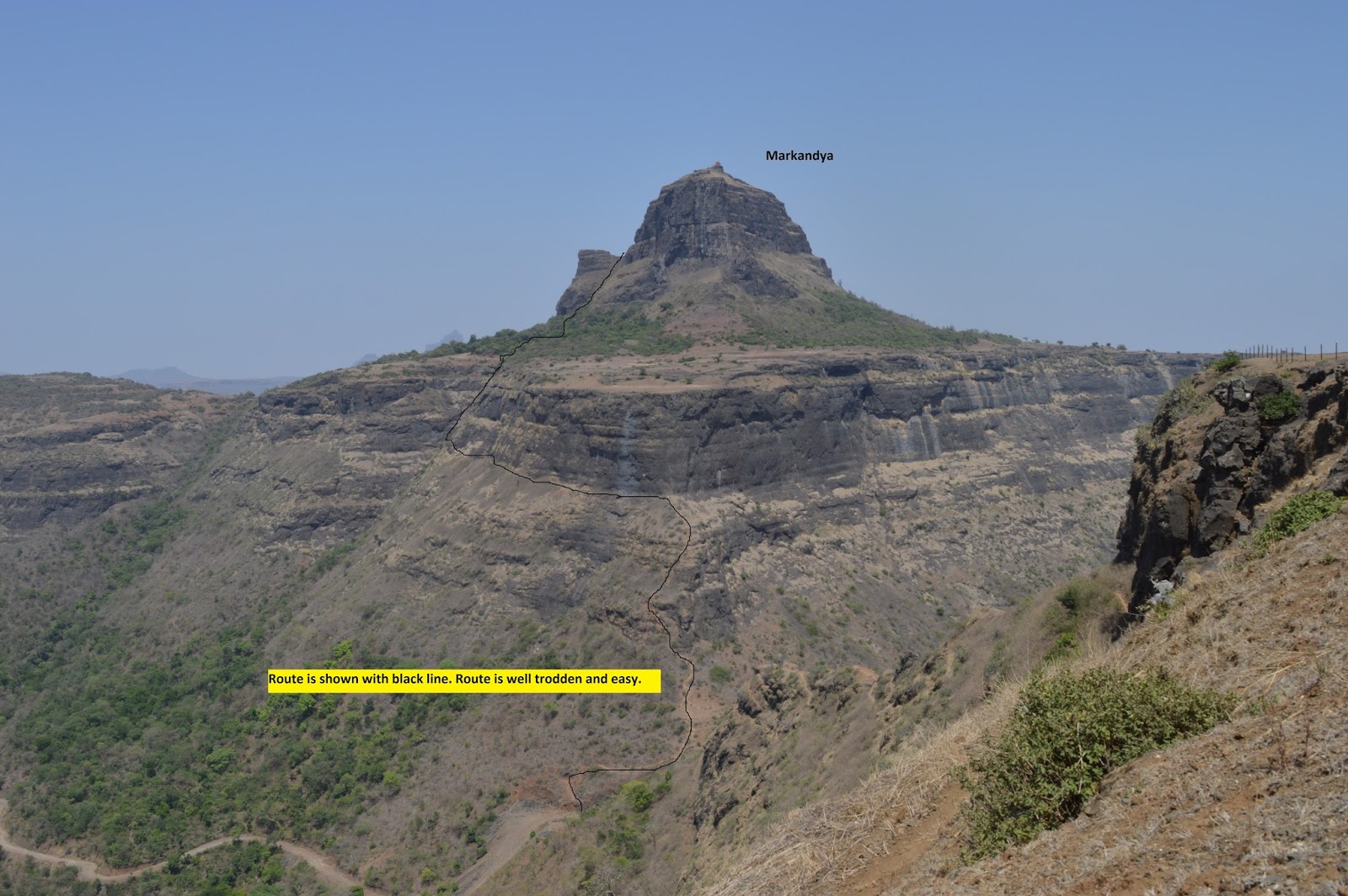 Ascend was really challenging due to scree, its steepness and unbearable heat. We were drained  so much during this climb. Once you ascend first patch, follow the traverse patch going in left direction(when you are facing Markandya hill). At the end of this traverse, nalicha route starts. Climb it and you will reach on vast plateau. There is small water body which can quench your thirst. We spent 15 minutes there to relax. From the plateau, distinct route goes into small jungle patch and then ascends again through a nalicha route( not literally though). At the apex of this nali, go towards right side hill. After small climb you will reach on the top. There are two ashrams on the top where pujari of the temple resides. We took blessing of Sage Markandya; chatted with the pujari and started descending. On the plateau, there are multiple ashrams. For what purpose they are so much in number is still question for me. 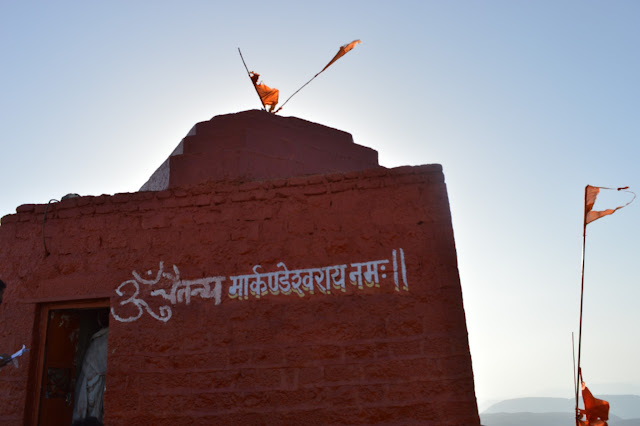 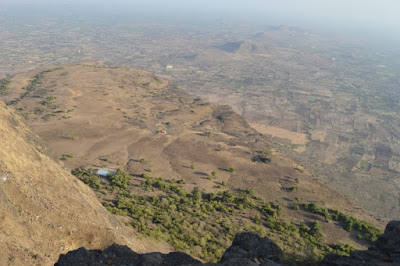 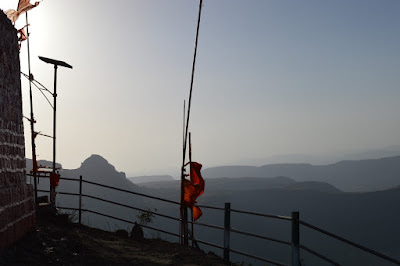 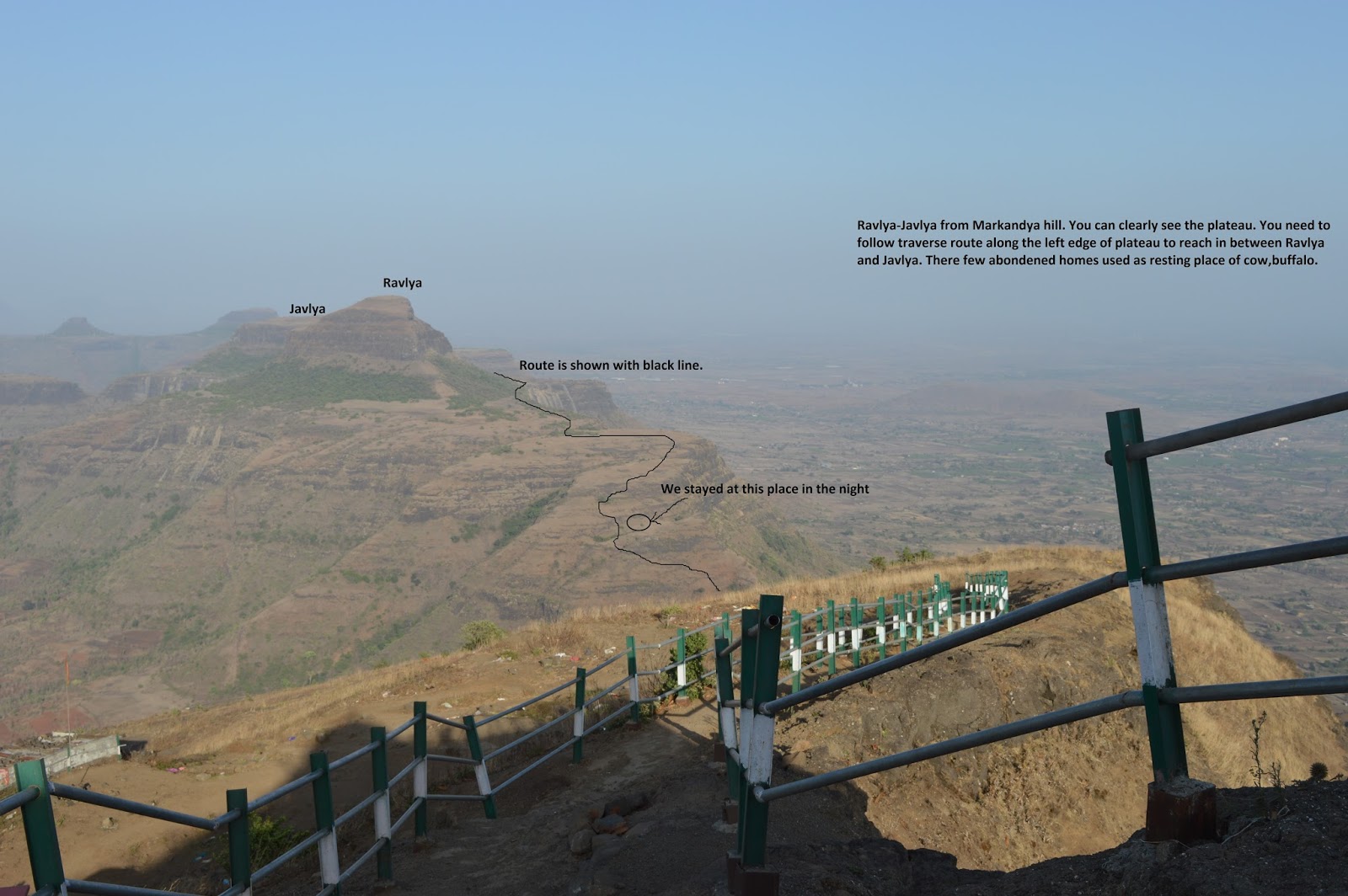 Our next destination was Ravlya-Javlya; the twin forts adjacent to Markandya hill.We followed the descending route which grounds at the ghat(also resembles like col); which connects Mulane and Babapur village. Route to descend is pretty easy and well marked by forest department by installing iron stairs and railings at appropriate place. It's already 6.30 pm in the clock. It took 45 minutes to reach the ghat. From there we started ascending the hill on which Ravlya-Javlya situated. It was simple route and our aim was to reach as near as possible towards the plateau area before it gets dark. At one point it was difficult for us to judge the route so we decided to stay in open space. God was certainly favorable with us that no rain registered during our trek schedule.
Mahadeo had brought ration with him.Ganesh and Mahadeo prepared fantastic khichadi again. With fulfilled mind and tummy, we slept with content feeling.

Second was more tiring than first day due to heat. But we were happy that we climbed 2 forts and reached near to 3rd one.