Situated at 4600Ft above sea level,Fort Rajgad boasts to be the first capital of Maratha empire.

How to reach there:
Rajgad is situated near Pune around 50Km.
There are two most common trek route to Rajgad

i) Via Gunjawane-Chor Darwaja
Direct ST buses are available from Pune -Swargate bus stand for Gunjawane. Or else you need to catch jeeps going till Nasarapur phata and then towards Gunjawane.

If you have private vehicle then follow the route as given below:
Pune-Old Katraj Tunnel-Shindewadi-First toll naka-Nasarapur phata(at this point we need to take right turn from the Pune-bangalore highway)-follow the route till Margasani-turn towards left and follow the route going towards Gunjawane. Always confirm your directions with local people.
This route is well trodden so less chances of missing the route. If you are newcomer then ask the village people about the route.
This route will enter into the fort through Chor darwaja @ Padmavati machi.

ii)  Via Pali darwaja
Catch ST bus going towards Velhe from Pune -Swargate bus stand. Or else you need to catch jeeps going till Nasarapur phata and then towards Velhe. Alight at Pabe.Walk towards base village Pali.

If you have private vehicle then follow the route as given below:
Pune-Old Katraj Tunnel-Shindewadi-First toll naka-Nasarapur phata(at this point we need to take right turn from the Pune-bangalore highway)-follow the route till Pabe-turn towards left and follow the route going towards Pali village.
This route is simplest of all and well defined too.

Places to see on fort:

All the places on the Rajgad fort are well defined and named by Shiv Durga Samvardhan Sanstha. Area of fort is huge. You need full day to see all the places on fort.
Fort consist of Padmavati machi, Suvela machi ,Sanjeevani machi and balekilla. Fort entrances are still intact and firm. They are Pali darwaja, Gunjawane Darwaja, Alu Darwaja and Maha darwaja(balekilla).


Fortification at Suvela and Sanjeevani machi are still strong. The main attaraction on fort is Balekilla, situated at the highest point of fort. Iron railings have been installed on the route to make the ascending of balekilla easy.

Posted by Yash Gaikwad at 09:44 No comments:


Panhalgad to Vishalgad trek is one of the must-do trek for every trekker and Maratha history admirer. We have learnt the Heroic and Patriotic efforts of Baji Prabhu Deshpande and other Mavles to rescue Chatrapati Shivaji Maharaj from the chasing military of Aadilshahi patron Sidhhi Johar, since school days.  I too was eager to complete this historic trek but couldn't succeed due to lack of trek-mates.
The golden chance had knocked me in June 2013 when Anna aka Harshad confirmed his availability for the trek. We have planned the trek on 7 and 8 June 2013. Anna’s friend Amit also nodded for the participation.
Anna came down to Pune from Nasik on 6th June evening. We left Pune from Swargate bus stand by 5.30 PM bus. Rain started with full gear and our bus stuck to heavy traffic jam just after Katraj tunnel. Those 1 and half hour were unbearable. After waiting so long, finally our bus moved and we relieved. But rain had spoiled our plan of staying at Panhalgad. We reached Kolhapur @ 12.30AM. At that time, all the transport option to Panhalgad as well as hotels (for our pet-puja) in Kolhapur were closed. We searched nearby hotel for our stay. Hotel Anugrah near the bus stand honored to have guest like two of usJ.
Early morning Anna’s phone rang with call from Amit. He came down to Kolhapur at around 5.00 AM. Welcoming him in the room; with many censored words, we again slept for an hour.
All of us completed morning rituals and got ready for the ultimate trek. 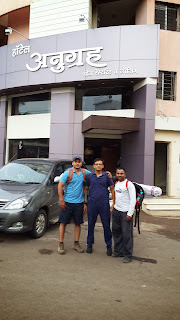 Panhalgad bus was standing in the bus stand. Lucky we!! 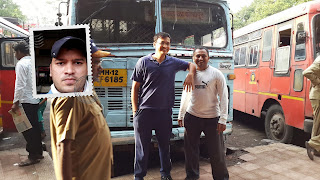 But left us on the Panhalgad at 8.45 AM. To our surprise, God Sun blessed us with clear sky. I was worried about the weather as last night Pune to Kolhapur journey was accompanied with heavy rain showers throughout. 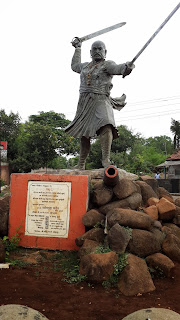 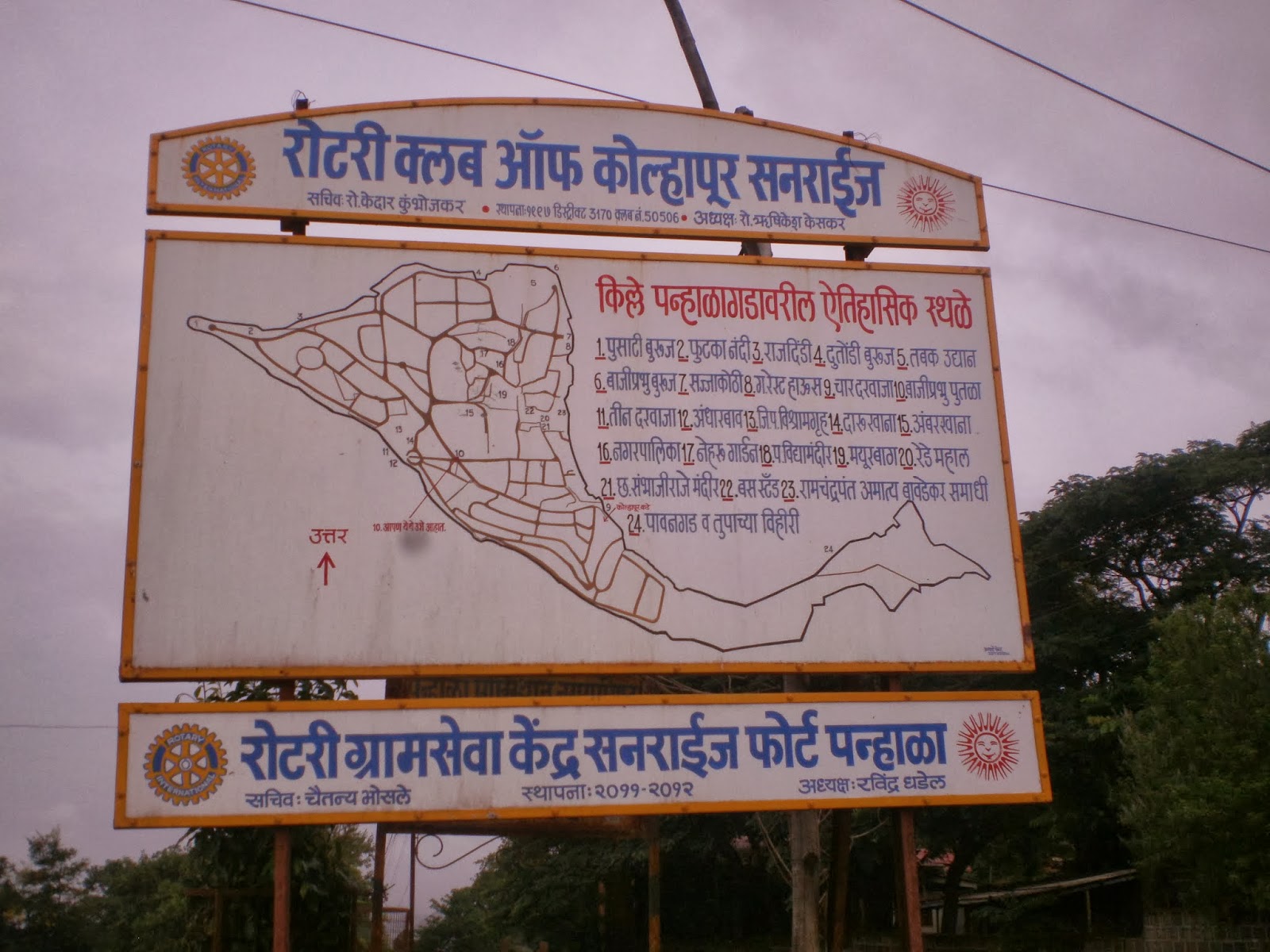 Without sight-seeing on Panhalgad, we started walking towards Pusati buruj. Small town is dwell on the the fort with all basic amenities. Way to Pusati buruj is good tar road. After walking 10-15 minutes, we reached to the point where straight way goes to the Forest office rest house and just beside the route going towards Forest observation point or historically called as Raj dindi. Follow the right kachha route going downwards to the Forest observation point. 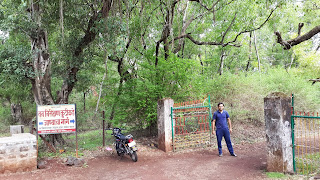 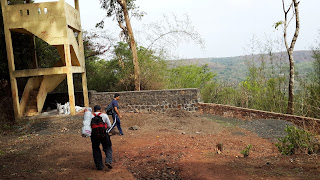 Descending through this route will take you to the tar road going towards Turukwadi.

From turukwadi same tar route will take you to the Mhalunge. You can opt for climbing the small hill in front of Turukwadi, which eventually takes you the Mhalunge village. 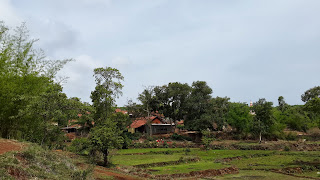 From Mhalunge, small ascend will take you to the vast plateau of Masai . The name derived from the temple of Masai mata. There are very little chances of missing the route as it is well trodden till Masai temple 2.
After walking 15-20 minutes, we reached to Masai temple 1. 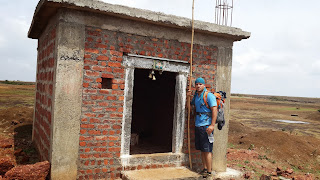 It took another hour to reach to Masai temple 2 which was full of crowd due to Friday. People were offered hens and goats to the deity of Masai. I always feel disgusted by seeing the filthy condition of each and every Hindu temple. Very few temples are maintained its cleanliness. 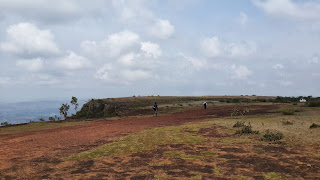 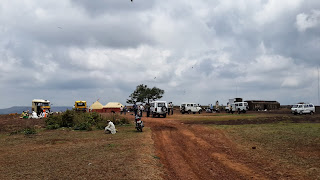 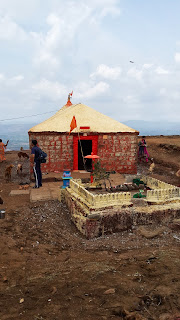 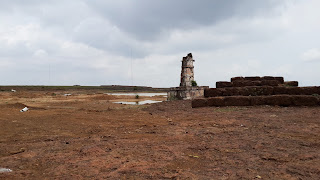 We had small session of pet-puja with Lasun-puri made by my dear wife. 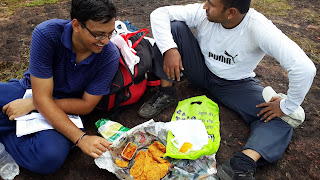 Our next aim was to descend down Masai plateau and reach Warewadi. Beside temple few meters away two iron pillars are erected (couldn't understand why???). Follow the routes going towards pillars direction. It is also well trodden road so not chances of missing the route. 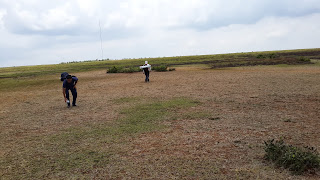 This route will lead you the descending of Masai plateau and at the end to Warewadi. Same tar road will take you to the Kumbharwadi. 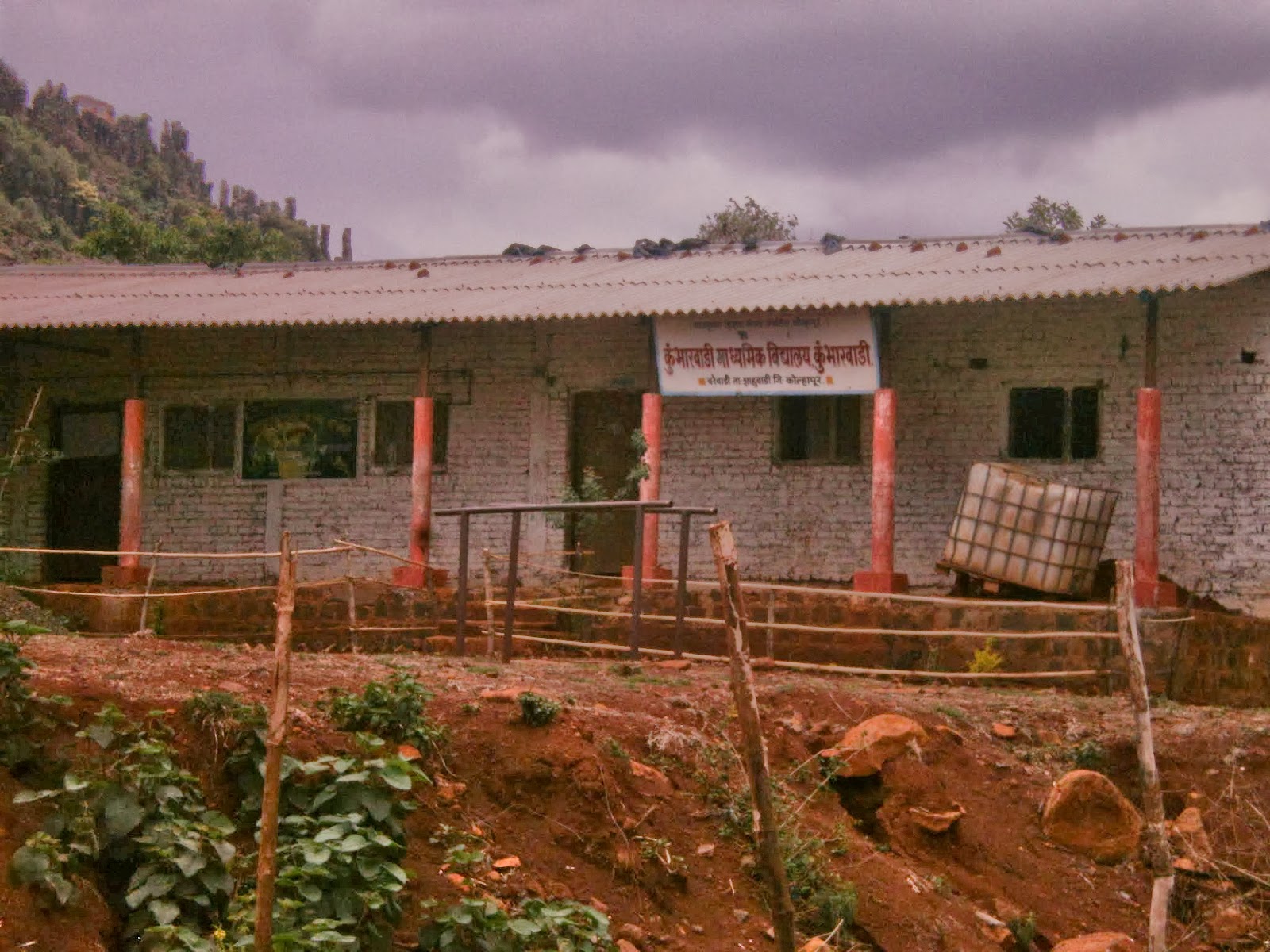 We filled our empty water bottles from nearby well and started our further walk towards Chapewadi/Khotwadi. To our surprises, we haven’t had experience any rain showers till the day.

From Khotwadi we headed towards Dhangarwadi. Every half an hour you will get new wadi so you can always confirm your directions.

We had tea session in one of the home in Karpewadi. They welcomed us very warmly and also offered to stay at their home. But according to planning we need to move till Ringewadi. So we started our journey towards Ambewadi and then Kalkewadi. We reached Kalkewadi @ 6.45 PM. 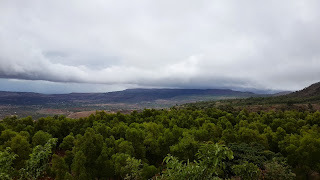 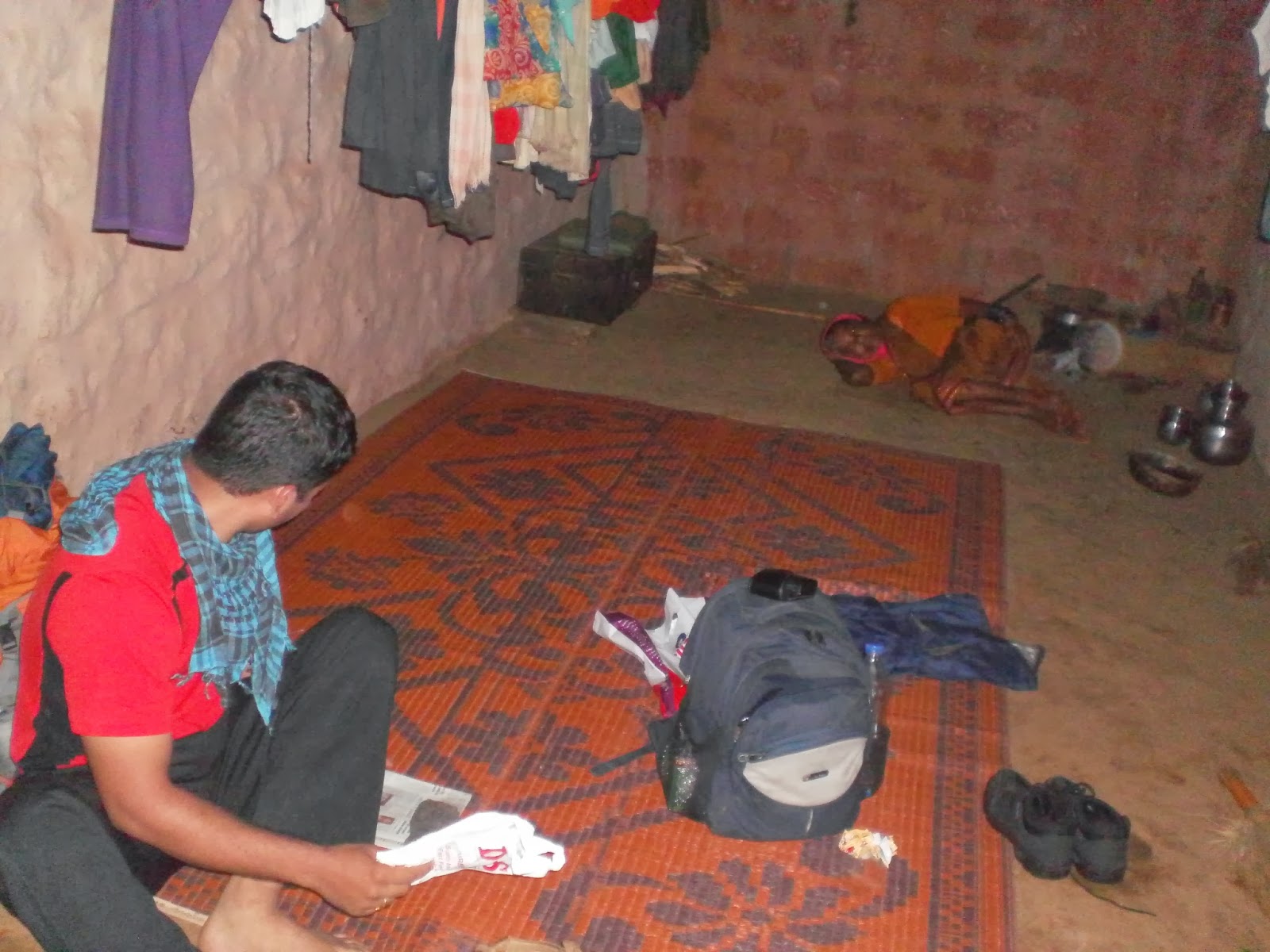 Anna and Amit did not interested to go further. So we ask one Grandma from a village house about staying into their home. She does not hesitated to welcome us into their home. Also we asked them to prepare food for three of us. Luckily they planned for non-veg menu. Lucky We!!!! Anna was pure vegetarian so we request them to cook small quantity of Veg items. We freshen up and chatted for a while. Suddenly rain started pouring. Day 1 was non-rainy day for our trek. I have read on the internet about this trek and every blog stated about the knee deep mud on this trek route. That is why we planned this trek early monsoon to avoid this muddy-mess situation. God helped us on day 1 by keeping whole day dry.

We had dinner at 8.30 PM with fish curry, rice bhakari and loads of rice. Anna had bhaji amti as Veggie. Rain was incessant. We came outside the house just to check the rain and to our astonishment we saw one of the most beautiful structures made by Fireflies around this Wadi. They were everywhere. Their frequency of changing the patterns was really amazing. It was one of its own experience for all of us.

With tummy full, we had very good night sleep. We woke up @ 6.00 AM. Having tea and paying the house owner Rs. 300, we started our journey towards Ringewadi. It was 20 minutes journey. 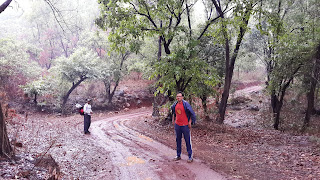 Very next to it was Malewadi. 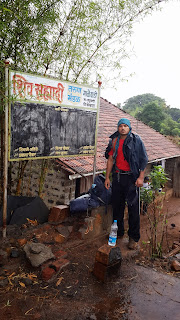 From Malewadi we followed the route to Patewadi. After few minutes of walking on tar road, you will see a diversion towards right side. Arrow markings are also there to guide you. Follow the route. We had small breakfast @ Patewadi. 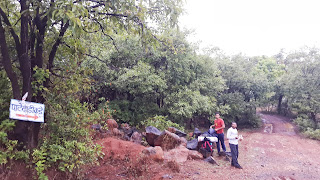 
The route in between these two wadis is entirely jungle patch. Though the route is clearly visible and not at all chances of missing the route; we faced the attack of Leeches. There were 3-4 water bodies enroute. Those areas were like the colonies of those blood sucking parasites. All three of us were too much busy on that entire route to pull Leeches away from our legs. Though Leech bite does not harm you in any way, but seeing someone sucking our blood desperately is really annoying. It took 20 minutes to cross this patch and reach Mhasavade. To confirm that we were free of leeches, we removed our shoes. It was shocking to found a leech on my foot. The size of leech was increased terribly. I removed it and the blood stream came out of that bite. I pressed a cotton bud against it to slow down the blood. Finally it stopped. We had a chat with local people about the trek route and then we headed towards Pandharpeni.


After 15 minutes walk we reached to tar road which goes to Pandharpeni. You can either opt for buses which directly goes to Pawankhind or walk down the distance. From this point, entire route is tar road. We decided to walk till Pawankhind. Pandharpeni is 2 Km walk. We had quick tea session @ Pandharpeni and then marched towards 6 Km patch of Pawankhind. 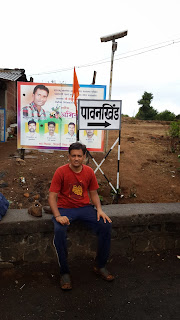 It was leisurely walk. Rain was unstoppable. We reached @ 2.30 PM to Pawankhind. That was the proud moment for all of us. We were about see the monument of bravery and legendary patriotism. Iron staircase have been installed to descend down to Pawankhind. Such a narrow gorge!! Perfect to trap anybody. We wandered there for a while and returned to the phata where we waited for bus. 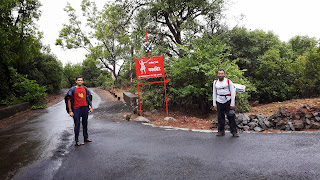 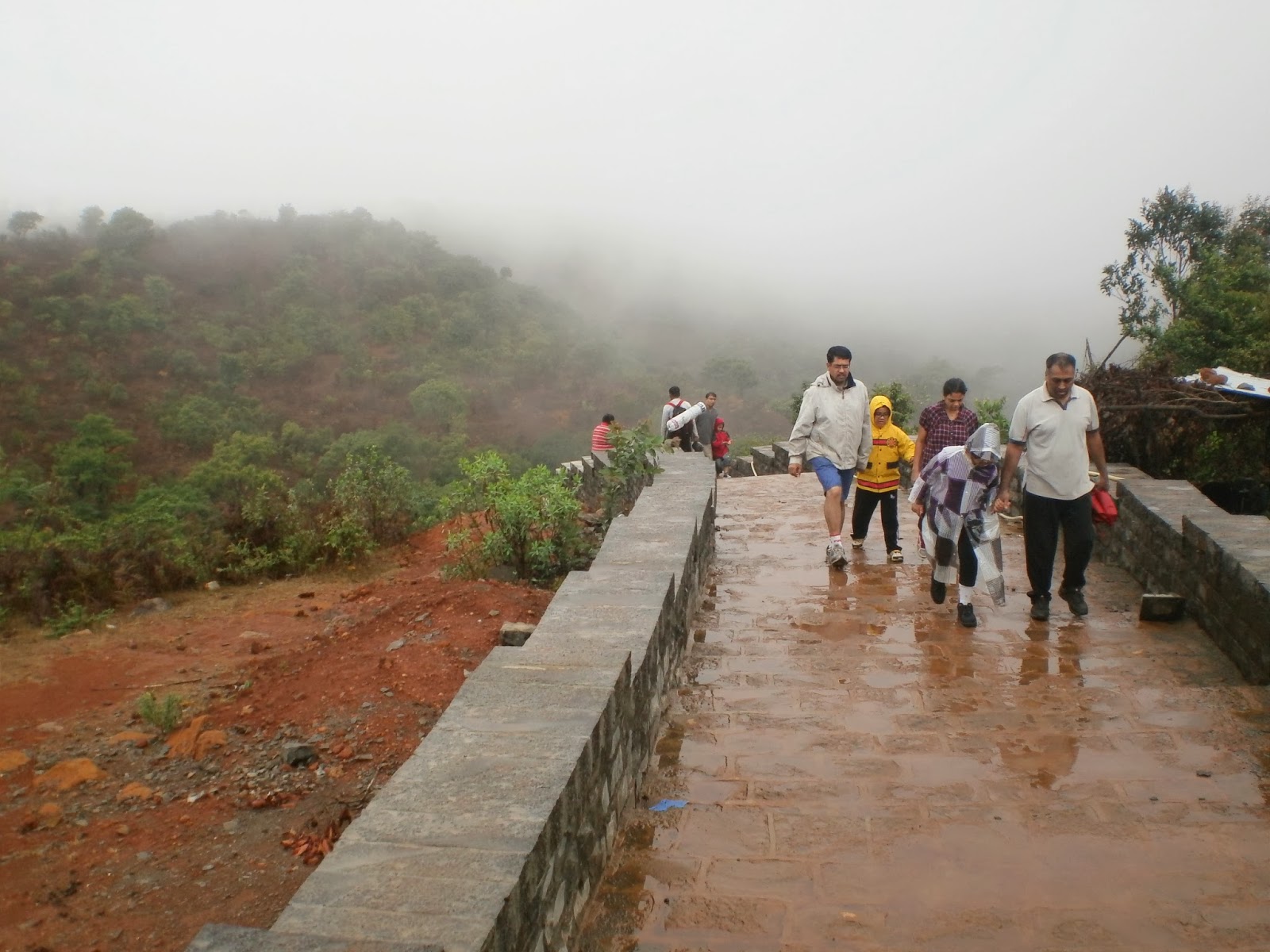 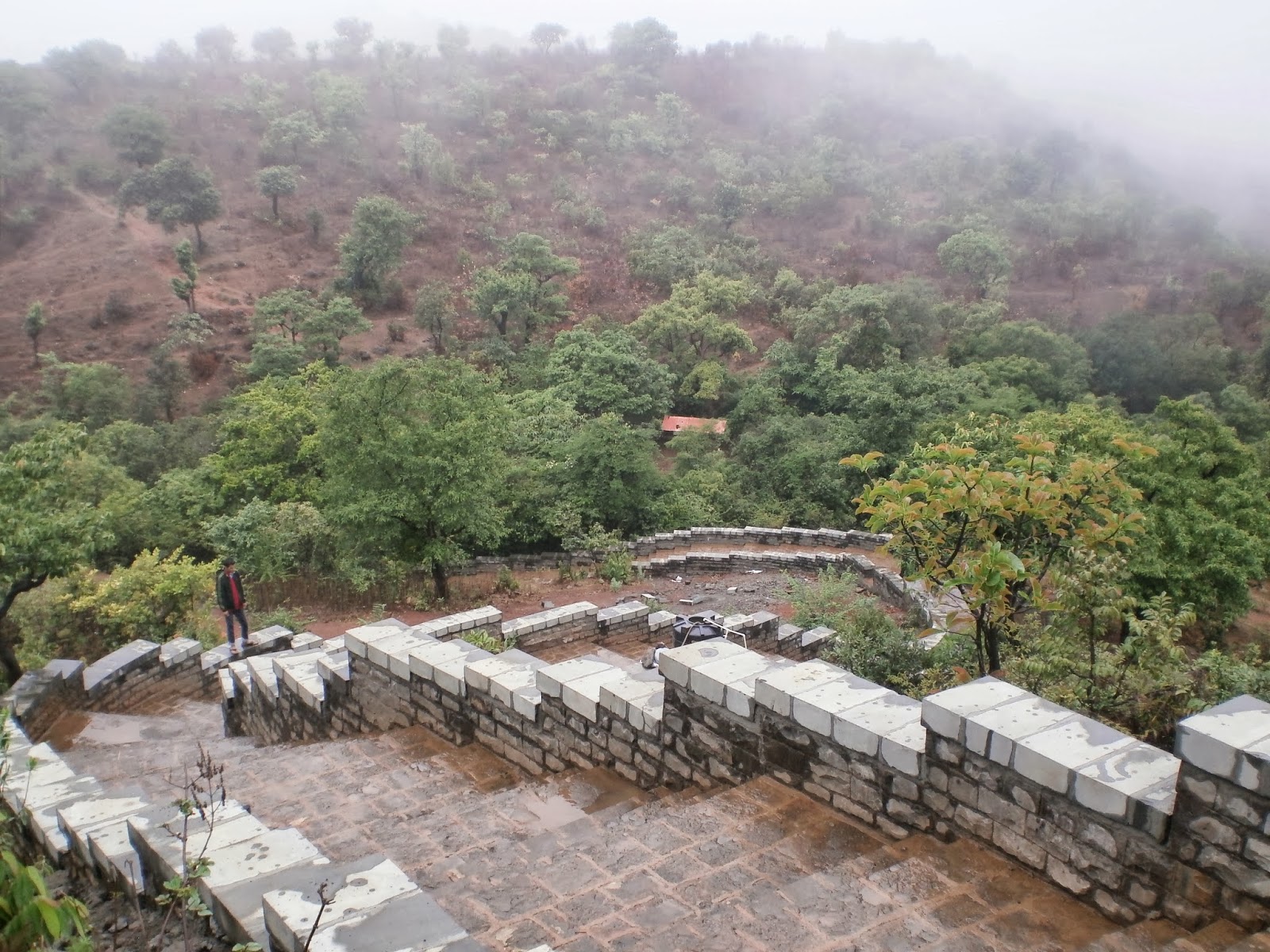 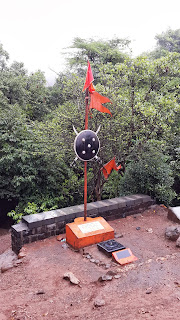 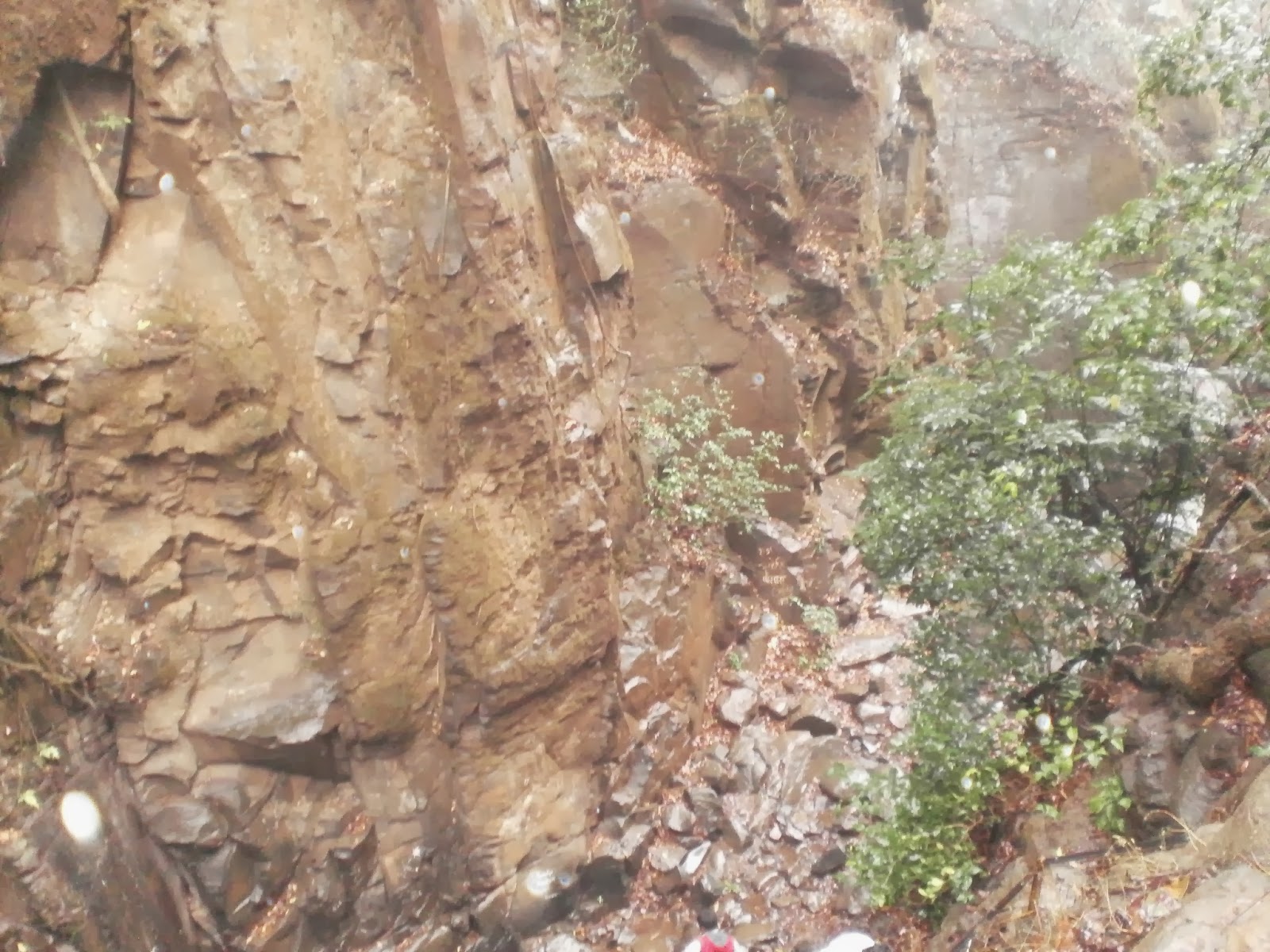 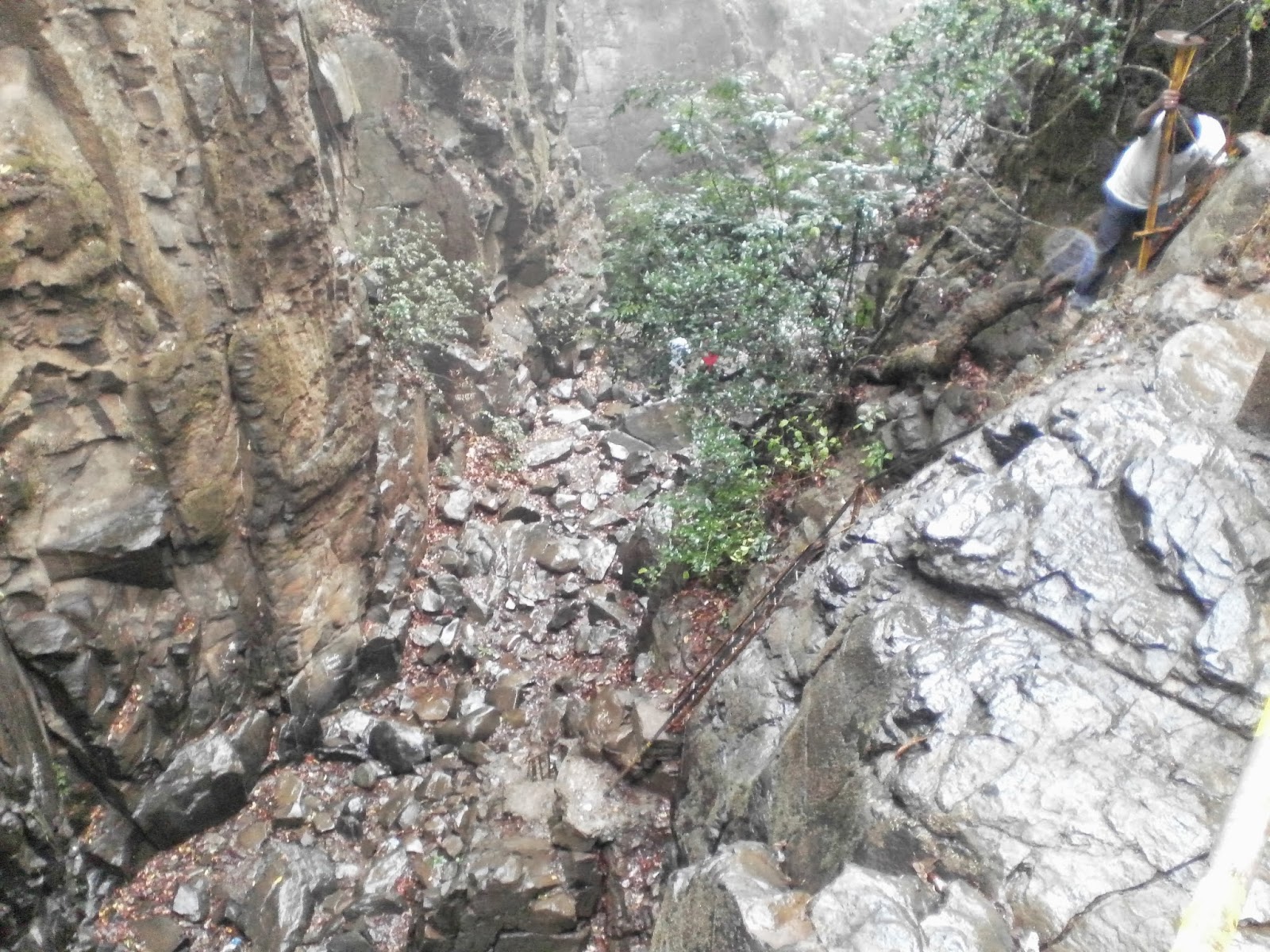 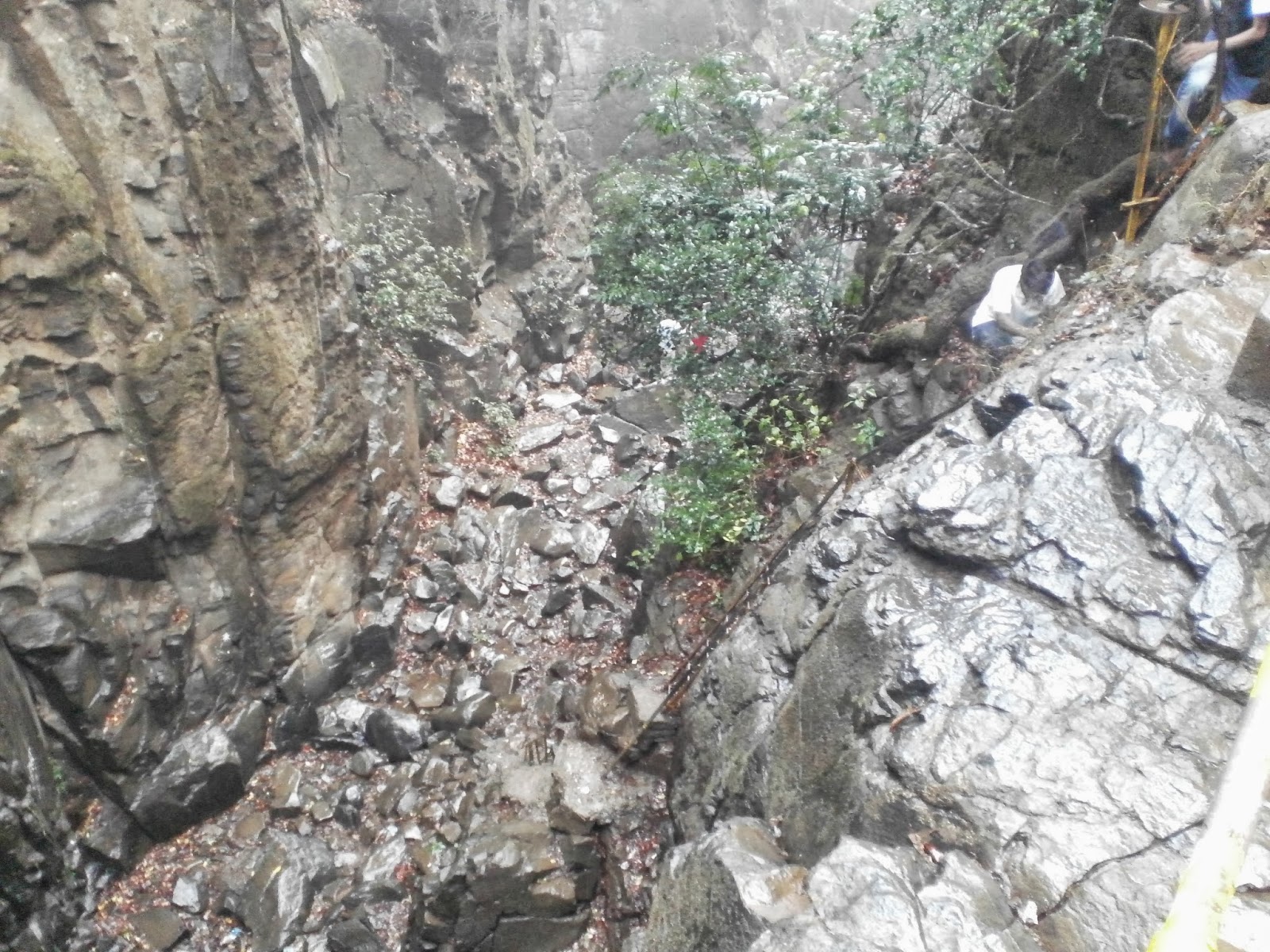 Around 3.45PM we got the bus going towards Vishalgad. After inquiring the last bus timing, we came to know that the same bus happened to be last one, which would return to the Kolhapur. Our plan to wander Vishalgad seemed impossible as we needed to rush Kolhapur and then to Pune/Mumbai. We decided to cancel the Vishalgad sight-seeing. Reached to Vishalgad @ 4.30PM. Bus departure timing was 4.45PM. Just 15 minutes to spend!! I feel very bad to see the filthy condition of fort. Pile of garbage and plastic pollution. How careless we are?

With heavy heart, we started our return journey. Felt good because of completion of the trek and on the other side sorrow state of fort made me disgusted. Hope we all understand the importance of these historical monuments.
During the trek, we shared many funny moments, caring villagers, kids in every wadi asking for chocolates and much more.
We finished this 17 hour trek with utmost satisfaction!!!!!!