Nasik is one of my favorite place for trekking. It carries lot of massive,ancient and magnificent forts in nearby ranges like Ajanta-Satmal, Trimbak, Kalsubai, Selbari-Dolbari. Each fort in this range has its own identity and structures. In monsoon, these ranges looks heavenly beautiful.

I was willing to trek all the forts in Nasik region but living in Pune and travelling to Nasik is bit tedious. So we planned to trek few forts in Ajanta-Satmal and Selbari-Dolbari range. It's been almost a year, where I hadn't trekked a fort. So I was eager to plan something with lot of fort trekking.
After searching extensively on internet especially trekshitiz and Wikimapia, we finalized around 10 forts. We had planned to finish this trek by 5  days; 23 to 27 May. Final trek-mates were Mahadeo, Ganesh, Gaurav, Ruturaj and myself. Our intial plan was to visit Achala, Ahivant, Markandya, Saptshringi, Ravlya-Javlya, Kanhergad, Kanchan, Chaulher, Mangi-Tungi, Salher, and Salota considering 5 days. But later we had to constrained it due to various reason.
For range treks, it would always be good to have a plan/itinerary. You can always calibrate it as per situation in the treks.

On 22nd , I left from office directly for the trek. We had to meet at Shivajinagar bus stand to catch a bus towards Nasik. By 7:30pm all gathered near bus depot. Due to personal reason, Mahadeo was joining one day later. After having dinner and struggling a bit for bus, at 8:30pm we boarded into Nasik bus. It took us almost 6 hrs to reach Nasik. We stayed at Anna's home overnight. It was much needed rest.

Initially I was skeptical about cooking during stay on Fort so we planned our trip in such a way that stay would be in base village. But in Gaurav and Ganesh insisting on having cooking while staying on Fort so we took some utensils from Anna's house and bought rice, dal, masala,oil etc from nearby shop. I must say it was wise decision. This part of story will come in later section.

We packed our bags with all necessary things and 4 ltr water each. We traveled towards old bus stand (just behind new CBS). We had breakfast near old stand and grabbed bus matching towards Vani. It took us 2 hours to reach Vani. From then we caught Surgana bus and after 15 minutes alighted at Pimpri or Pimpri Achala. It was clocked 10.40am in the clock.
In this village there are 5 Virgal of height 6 ft. It's really good to see it in very good condition. We walked 2 km to reach to base village Dagad Pimpri. 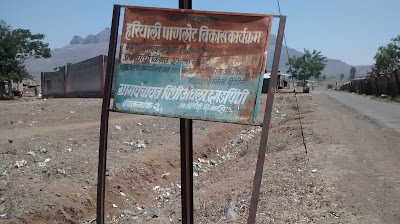 You can clearly observe the temple near a col in between Fort Achala and adjacent Bhairavnath hill.

Confirming directions, we headed towards col. Facing col, Fort towards left is Achala and route going towards right will lead to traverse route to Fort Ahivant or to Belwadi village.

We reached to temple at col , through farms and then ascending small hill.

Follow the steep ascend infront of temple. This patch is full of scree. Steep climb in harsh heat made it worse for us. Once you reached at the rock face at the end of ascend, follow traverse route keeping Fort at your left side. At the end of traverse , you need to climb small rockpatch; which takes you directly on the Fort. You will also find rock cut steps. On the left side at entrance, there is totally buried water tank. At the top, there are 3-4 water tanks in semi buried condition and remnants of a temple. No water is available on the Fort Achala. It took us 2 hrs to reach on the top.

Spending half n hour on the top, we descended down till temple.Descend was more challenging due to scree. Fortunate thing was we kept our bag at safe location near temple. It saved our energy  while climbing the hill. Trekking in summer is challenging only due to heat and in turn dehydration. We followed the same procedure(keeping the bags downhill) for most of the fort during our Nasik expedition. But we did not forgot to take water bottles along with us.
We reached to col at 2.20 pm. En-route we enjoyed galloping karvand(reddish berry). At the col, we greeted with lady from Bilwadi village. She told us to avoid traverse route due to slight difficulty.
As our water reservoir was significantly down, so we decided to descend down to Bilwadi; have water bottles filled and also some snacks if available. In the village, we had cold-drinks and filled the water bottles in a well. Route to Fort Ahivant from Bilwadi village passes through dense Aamrai(garden of mango farm). Confirming the directions with villagers, we moved towards Ahivant at 4.40 pm. Route to the fort is well trodden.

En-route we had seen completely destroyed temple. It looks quite old by looking at stone architecture on the pillars. We felt really bad for such condition of our ancient monuments. 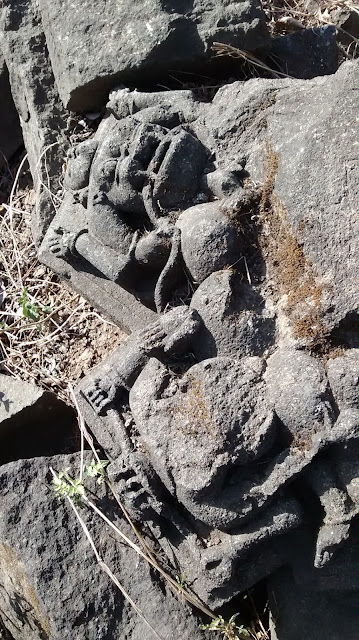 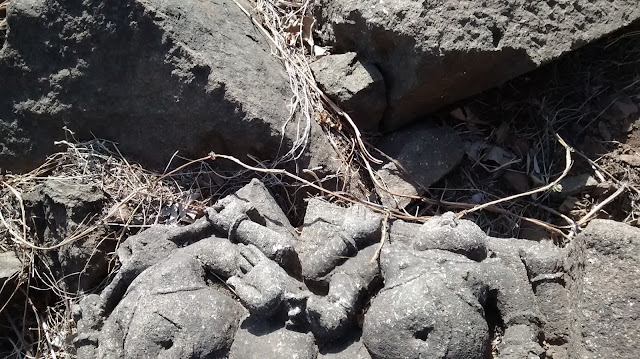 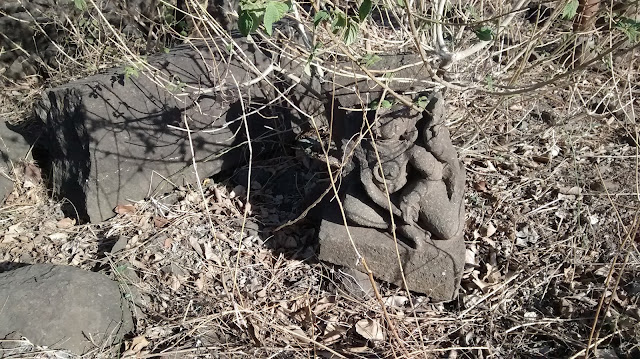 Moving forward we passed besides Hanuman temple. This is the landmark to remember the trek route. 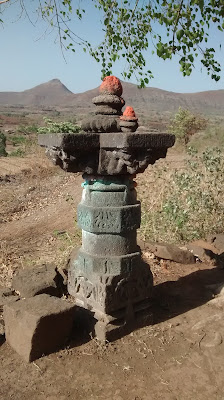 From the temple ascends start.At the end of the ascend , you enter into soothing and fruitful traverse called Aamrai. Villagers have planted and grown mango trees on this hill. It was great relief from the heat. We enjoyed some raw and some ripe mangoes there. 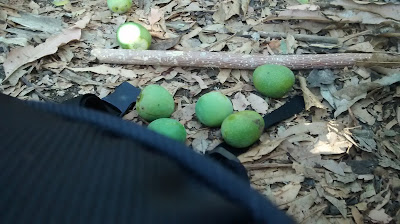 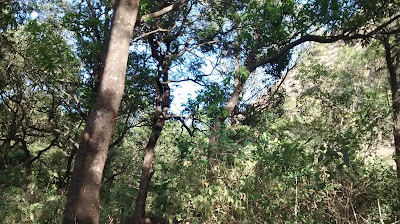 After walking few meters in the Aamrai, you need to look for right diversion which ascends the hill. If you choose correct right diversion at the end of ascend, you will directly enter onto the fort Ahivant. Entrance from this side is completely destroyed.There are two caves near the entrance.  Villagers used these caves as resting place for cows and buffaloes so it not suitable for night stay now.

Cooking for the night had started by Ganesh. We found water near end of nalichi vaat. There is small temple near water source. Gaurav ignited the fire for cooking. The one and the only menu was Khichadi :). In a hour, we finished the cooking operation. Khichadi was awesome. It was finished within 10 minutes. I must say it was wise decision to carry cooking ration with us. We slept in open area, with wind flowing wildly throughout night. First day and night went well except heat!!!!
The expanse of fort is huge. So we decided to skip the fort seeing to manage our trek itinerary. In the morning clouds gathered on the fort. We wake up early at around 5.30 am. We needed to descend down to Daregaon. Clicking some more snaps we started our day-2  in Nasik region. 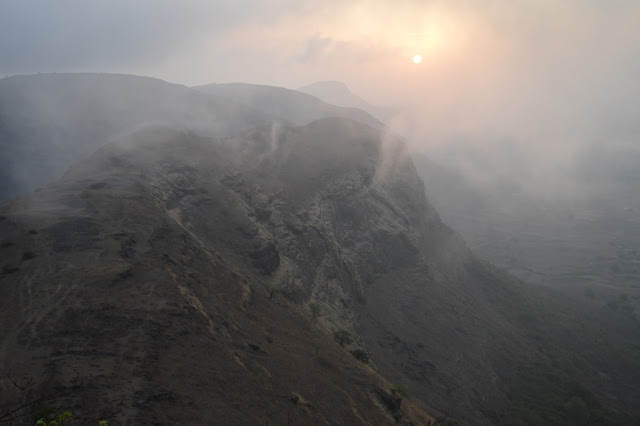 Note:
During this whole trek what I appreciated is helping nature of villagers. In our 4 days trek, each and every person we greet was extremely affable and helped immensely. Also in every village we found spacious temple. So even if you need to stay in village around these forts, you can stay easily.